Most mornings I get up and unless I have other early morning commitments I take the dogs for a run around our farm, situated on the mountains of Klein Drakenstein Municipality in the Western Cape of South Africa.  Because it has a Mediterranean climate with dry summers and wet winters, unlike the rest of sub-Saharan Africa which has wet summers and dry winters, the Cape Floral Kingdom is unique and diverse and known as the 8th Floral Kingdom of the world.  All year as we are out running, me and the dogs, a spectacular botannical feast unfolds before us, and every year I think that I must find a way to share it with a broader audience.  Collectively the shrubs and bulbs of the Cape Floral Kingdom are known as Fynbos.

The year starts, in my mind, at the end of February or early March which is the end of summer in this part of the world.  Typically we have had a hot dry summer, often with no rain at all from early January and the floral life dries and dies by, with only some robust flowers, usually near a source of underground water, surviving the heat and blazing sunshine.  We rarely go over 40 degree here on the farm, but in the valley, in Paarl, it can be 45 on a hot summer day.  Suddenly, before the rains, the mountains burst into life, as Protea Repens, for me the first flower of the new botannical year, bursts into life.

This year I will take a photographic record of as many flowers as possible, starting with Protea Repens, and including a tiny pelagonium that I found nestled by the side of a path, unusal for the time of year.  I will include anything I know about the plant, but I welcome comments as I’m no expert.

Protea Repens is common on the Du Toitskloof Mountain and is commonly known as sugarbush.  It can be pure cream, or the petals can be tipped with pink.  The flowers are narrow and cupshaped.  The shrubs, here on the farm at least, grow in massive quantities and the spectacle of pink and white flowers is a magnificent sight.

There are hundreds of different pelargoniums, worthy of a book in themselves and we have many different species on the farm.  I couldn’t identify this one. 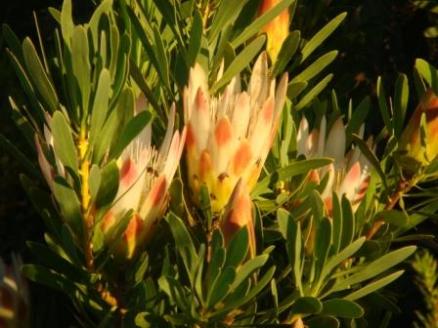 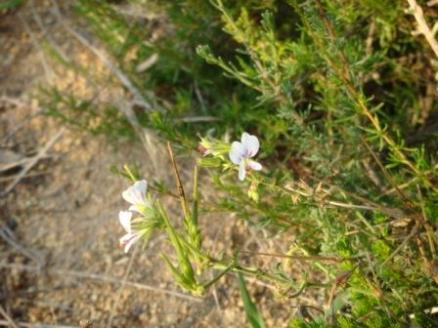 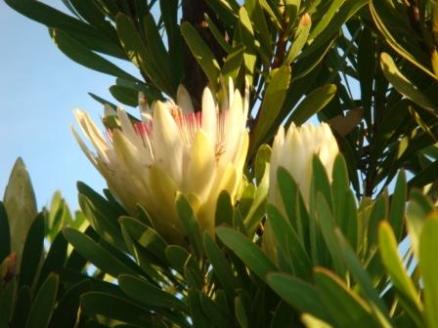