Posted on November 8, 2016 by fynbosblog 4 comments

This is the time of year when we see snakes.  They wake up from their long winter hibernation and are at their most active as they have to build up their reserves of fuel and fat.  We don’t see very many but over the years there have been cape cobras, puff adders, the odd boomslang and countless harmless mole snakes, grass snakes and olive snakes.  I am no expert so I’m wary of them all, but unless it’s a puff adder making a home in the garden we tend to live and let live.

I see them only rarely when we are out running on the farm looking for flowers.  At this time of year the spring flowering season slows down but there are still delightful surprises around every corner.  One particular favourite is Aristea capitata, the long blue spikes grow in damp shady areas all over the farm. 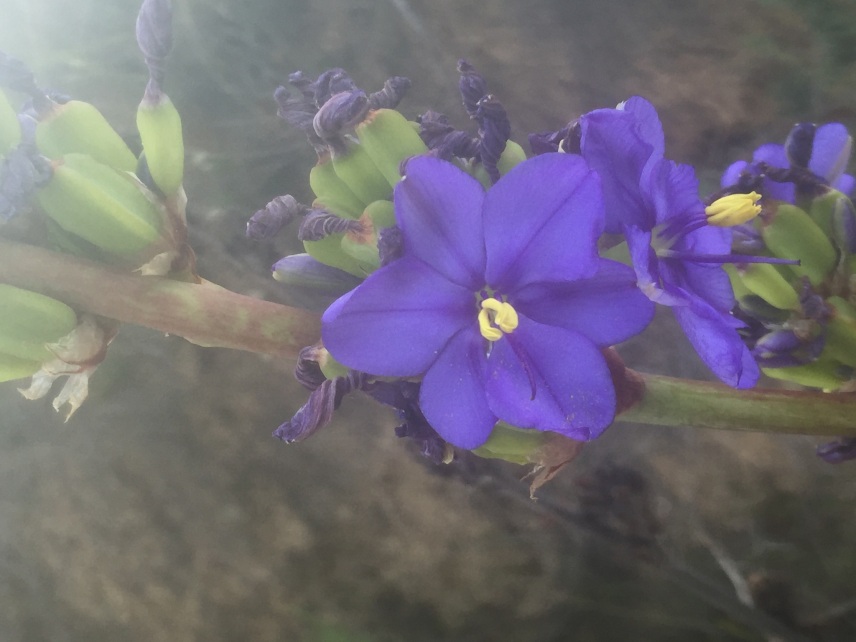 We’ve never had trouble with snakes and the dogs and when a boomslang was spotted heading for the tree outside the Manager’s House, near Peter’s office, none of us was particularly concerned.  We were alerted to her presence by the crazy antics of the fork tailed drongas, mobbing her because she was after their chicks.  We had guests staying in the Manager’s House and we didn’t mention the snake to them.  Boomslangs are very shy and live in trees. Although their venom is the deadliest of all snakes, causing internal bleeding and death, they almost never bite people in the wild.

The following week she was seen again, a long snake and surprisingly cheeky, on the ground and not heading straight for the tree when she was disturbed.  This is unusual behaviour for a boomslang.  They are diurnal, which means they hunt in daytime and as Peter says, at 2 metres she was huge and may have been driven down from the trees to get enough food.  She was hanging around between the Manager’s House and Peter’s office and with the flow of people and animals in that area there was no way this lethal snake could be allowed to stay there, so we took action.

Not before she claimed a victim.  Last Sunday morning little Murphy, the Irish Wolfhound puppy started to look unwell.  We took him to the vet, who treated the symptoms.  Later that night we lost him.  We were completely stunned, especially when the autopsy showed that he had bled out.  We don’t keep those kinds of poisons on the farm and Murphy was too young to wander.  We really couldn’t believe he had been deliberately poisoned, our farm is not the kind of place where that happens.  When the boomslang reappeared, unafraid and on the ground on Tuesday we realised she must have got him; the symptoms match perfectly.  She was in the area outside Peter’s office where he frequently played.  The experts will tell you that it’s most unlikely and they are right, we were excessively unlucky.

Murphy was with us just long enough to capture our hearts; his future sang with possibilities, I couldn’t wait to take him for his first run on the farm.   This blog is above all a hymn to nature but there are times when nature, at her purest, is very cruel.