You forget, from one year to the next, what the dry season means. I can’t remember when last it rained. There have been a couple (literally two) of showers in the last few weeks, but real proper rain has not been forthcoming since early February, maybe even mid-January. Now all life has been sucked out of the land. The farm is desolate, shriveled and dry. The wind still howls, drying it further. The vines in the valley have been harvested. Our olives are full of ripe fruit, the havest begins next week. Fires ravaged the Cape Peninsula and Jonkershoek which is east of Stellenbosh but fortunately not our mountain, not yet, maybe not this year.  This time last year we had already had some cool damp weather and over 40mm of rain in the last week March.  This year, nothing.

I imagine the great weather fronts building out to sea, far off in the Atlantic, and suddenly veering south before they touch land, the longed for rain slipping off to the great ocean wastes where it is hardly needed.

Longing for rain is not in the Irish psyche as it is in the African. When it rained on our wedding day all the Africans said ‘you’ll have a lucky marriage’. The Irish didn’t; in a country where it rains 200 days a year or more it might be seen as fortuitous if the rain held off for a day. Now I understand the longing, the ache for the mist dropping slow from the sky. In fact I understood it within months of moving here. We lived first in Johannesburg where the winters are dry. I moved here in July and by late September in a dry year the dust and brown earth become unbearable, people are irritable and cross. Here in the Cape it is the hot summer that lacks the rain and it seems summer is long this year. Perhaps it seems long every year. There was rain forecast for the Easter weekend but it has disappeared, swept out into the vastness of the Southern Ocean, gone forever.

Meanwhile not much flourishes out in the fynbos. Except the magnificent Protea Repens, which was once South Africa’s National Flower. This creamy white, sometimes pink tipped, protea likes to flower before the rain, in the driest season. A harbinger of fecundity and life to come. 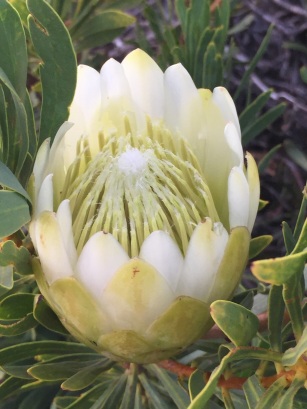 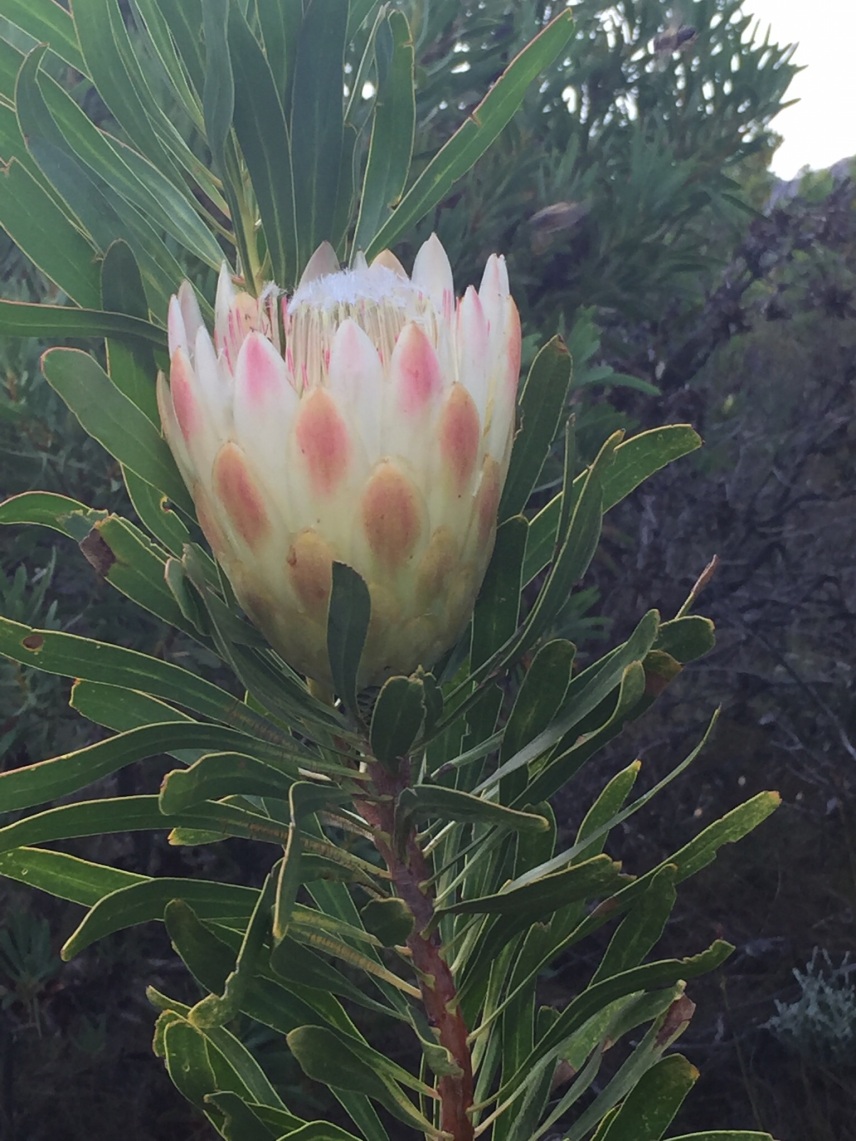 The other protea that flowers before the rain does so more timidly. Protea nerifolia, a particular favourite is also sending buds out into the dry air. But the truth is that it will blossom lavishly only when the rain has come.

The dogs are well, the sunsets magnificent. All of Cape Town seems to be suffering either flu or a tummy bug – the bugs enjoy this change of season and have flourished. No running for me, for nearly a week now I have been off colour. This evening I took the dogs for a walk, our first for a while, and captured them as they took a breather in the seasonally shallow stream by the weir.