The Rooi Afrikaner or Gladiolus watsonius – a technical blog

For at least four weeks I’ve been frustrated by this glorious red gladiolus. 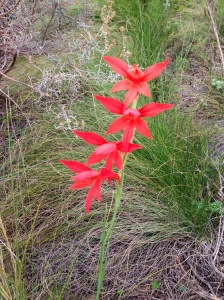 The species is easy to identify, the subspecies has been confusing; our first sighting was at the end of May and the book says it doesn’t flower until August.  Even the more detailed encyclopedia says that it flowers from July to September. Furthermore it grows in clay and granite slopes in renosterveld. We have granite and sandstone slopes which is a subtle but important difference when it comes to fynbos. Over the weekend I got more serious and looked more closely – the only possible suspect was Gladiolus priorii. But Gladiolus priorii has a yellow throat and although I didn’t have a photo of the throat, I was pretty sure it’s not yellow. I couldn’t really bring myself to believe that we have a previously unidentified Gladiolus on the far, tempting though it might be.

Today I picked one.

It had fallen over a bit on the bank above the drive, it’s a bit tatty and it was time to take this whole process of identification a bit more seriously. And I can reveal that Gladiolus watsonius has one particular distinction. The lowermost leaf is narrow and H shaped in cross-section. No I didn’t get the scalpel out – I’m not that much of a geek yet. It’s pretty obvious just looking at it. 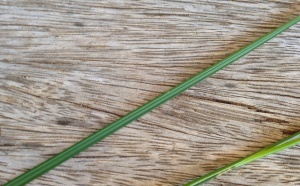 The lowermost leaf of Gladiolus watsonius

We have a positive identification – it may be the wrong time of year, it may not be quite the right soil-type but there is no doubt: Gladiolus watsonius likes Du Toitskloof and it likes our farm. It flowers when it chooses to and it’s not going to change, so the sages who write the books may need to change a word or two. 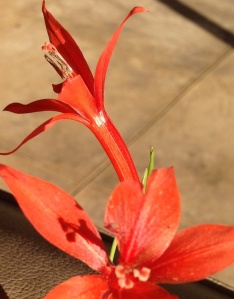