Running in between the flying

When I got home from Nairobi last week little Jemima Chew was not looking her usual self. She’s what the South African’s call a ‘pavement special’, an SPCA rescue dog who arrived in our lives shortly after Seamus. Although quieter than the attention seeking wolfhounds, she’s a lovely dog and often ends up a favourite with guests. She also gets bullied by Maebh as a result of which she now sleeps on our bed at night while the hounds sleep in the kitchen.  A perfect outcome from her point of view.

Jemima Chew (named for the Jimmy Choo boots she very nearly destroyed as a puppy) is always alert, always ready for action and always hungry. So when she was down in the dumps, refusing food and clearly off colour we were quite worried. Especially when Peter told me she’d been that way for a couple of days. She didn’t have a temperature, but in our part of the world you worry about biliary and I found a couple of ticks on her. We rushed her to the vet and although she didn’t have biliary she did end up on a drip for 24 hours. Poor girl, she’s so tough that in six years its’s the first time she’s ever had to go to the vet. By Sunday she was home, feeling much better, wagging her tail and demanding dinner.

Here she is in the misty afternoon light a week later. It poured with rain all last weekend but stopped early enough on Sunday afternoon for us to go for a quick run before I had to leave for the airport. This blog is being written on a plane between London and Frankfurt. 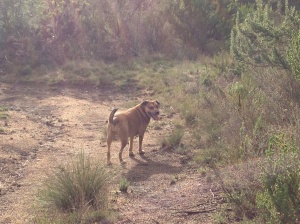 The light was fantastic and made the grove of Ilex Mitis by the weir look like a scene from The Hobbit. Seamus and Maebh put on their best performances for this photo. 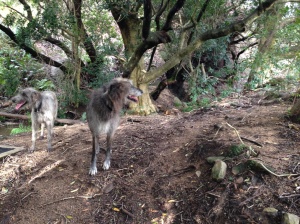 Scene from The Hobbit, starring Seamus and Maebh

The waterfall, which I posted only a few days ago, is now white with pounding water – we must have had 30mm of rain at least and the farm is soaking wet. 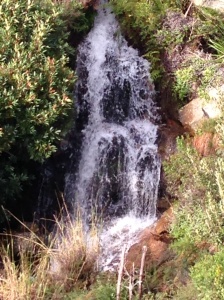 One lovely result of a few days of rain is all the bird activity when it stops, especially as this is the mating season for most of our birds. We took a different route through the fynbos today and saw lots of Cape Sugarbirds having battles over the girls. The iphone which I used for all my flower photos is much less good at caputuring fauna but I did manage to get one image of the sugarbird inspecting his territory from the top of a Protea repens.

Not so many flowers on this run – the rain, followed by some sun, means there should be some new things to see next weekend when I get home. This is a new protea gleaming in the soft winter light.  I have promised myself I will be stricter on identity this year, but I’m not sure what this subspecies is. 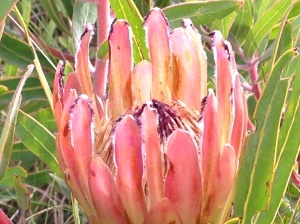 No problem identifying Chasmanthe aethiopica which we have posted before.  This group grows higher on the mountain on a different part of the farm – a damp shady area just below the weir. Such a lovely flowering bulb and reliably reminds me of the damp sweet smelling Irish spring where it grows wild on the verges and in the hedgerows. 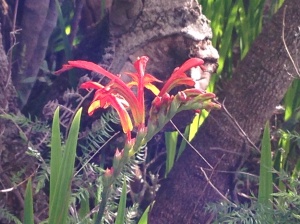 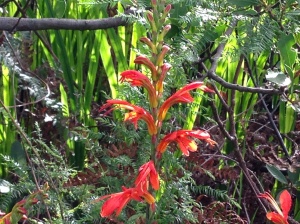 Another shot of the graceful and beautifully coloured Chasmanthe aetheopica