The wind is howling tonight as I write and I confess I am still nervous about fire.  When it blows like this I can’t sleep.  Almost everything around us has gone, but we are a green oasis on the mountain and the fire might like another bite.  Peter doesn’t want me to call them flare-ups, but how to name the smouldering stump that suddenly bursts into flames?  We have them all the time, sudden breakouts.  The drama is over but the battle continues and we long for rain.  It could be a month or more.

Protea repens chooses the hottest and most inauspicious time of the year to flower, covering the farm with fat pink and white flowers in February.  This year they are dead skeletons and thousands of seeds, probably millions of them, released by the heat of the fire.  And yet…  As I ran around the desolate blackness with the dogs the other day, here and there a protea has survived; sometimes a whole group of them.  By the lookout at the top of the farm all the leucodendrum tincta are intact – Fire two came at them from one side, and Fire three from the other, yet somehow that tiny part of the farm didn’t burn. Where they have survived they thrive and I managed to photograph a couple of Protea repens, one on the drive – literally the only one left out of hundreds, and one from the top of the farm on a different day. 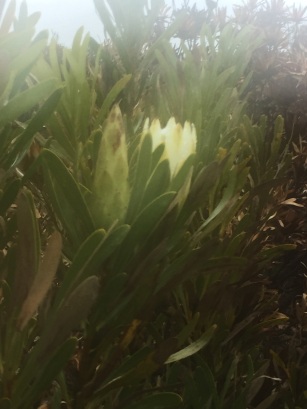 Protea repens on the drive, a flower almost hidden behind the singed leaves

Early the other morning Peter came and called me urgently – I was fast asleep.  “Sarah, come quickly.”  Sometimes it’s really annoying when he does this, but sometimes he’s got something really worth seeing.  I dragged my unwilling body out of bed, onto the balcony and into the cold dawn.  Meabh was sitting by the edge of the dam barking.  Right in front of her, not five metres away, was a cape clawless otter, teasing her.  And right behind him, a few metres back, his family was playing and cavorting in the water.  Peter told me he’d seen this when I was away, but it seemed so incredible that I hardly believed it.  Yet there they were, wild otters, teasing the Irish Wolfhound.   A couple of evenings later they were there again.  I didn’t manage to capture the otter, but if you look closely you can see the silhouettes of Peter and the dogs in the silver water and to the left the ripples of the otter as he swam away.

It is a great privilege to live in Africa and at times it’s a privilege that exacts a high price.  At other moments you get cape clawless otters in the sparkling dawn.